After a dominating performance against Lehi, the Timpview Thunder Birds are headed to the State 5A title game next Friday against the Orem Tigers. On Lehi’s first offensive possession the T-Bird defense came up with a turnover however the offense was forced to punt on its first possession. From then on, it was a heavy dose of run plays from Senior RB Sione Moa and junior RB Targhee Lambson. Both RB’s combined for 329 rushing yards, with Targhee leading the way with 213 yards, 4 TD on 22 carries and Sione with 116 yards on 14 carries. Not to be out done, the defense was nearly flawless all night and capped off their stellar game with a 29 yard pick 6 by Raider Damuni. Next Friday’s game against Orem will be a battle for the 5A state title, however our T-Birds have an opportunity to make right a loss they suffered earlier in the season against this very same Orem team. GO T-BIRDS!!! 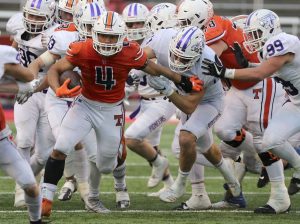 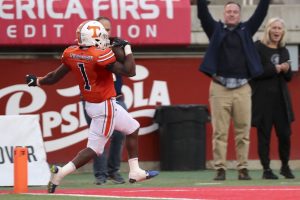 Deseret News called him “SUPER Targhee”… yes he is. Here he is scoring 1 of his 4 TD’s in route to 213 rushing yards. 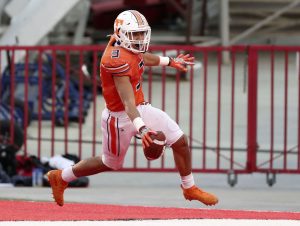 Raider Damuni shutting the door on Lehi’s hope for a come back with a “Pick 6”.