Last night your T-Bird Men’s Basketball team earned a spot in the 5A State Championship game Saturday afternoon against the Red Devils of Springville High School. In an exciting game that saw 6 lead changes, gritty defense, and momentum’s fickle wave just out of the reach for each team, one play summed it all up. With 45 seconds left in the game and both sides squared at 47, Farmington had an opportunity to run down the clock and take the last shot of the game. However, Timpview’s defense caused a turnover and with 25 seconds left, the T-Birds had a chance to win in regulation. With time running out, an unlikely hero took the final shot with 2.5 seconds left on the clock. As the ball left his hand, silence feel over the Huntsman Center, as his teammates rose off the bench in anticipation with Coach Santiago grinning with confidence, the ball rattled around the rim  three times before finally traveling through the net as the horn sounded. Any doubts about his “Big Time” abilities were drowned out in a sea of cheers from the student section, and a 2 for 6 shooting night was lost to memory as his teammates mobbed him at center court. Jaxon Santiago was tonights hero, but there was a moment in the game when things didn’t go his way. Towards the end of the 3rd quarter with Timpview up by 7, he committed back to back turnovers and a foul which erased that lead to 3. With momentum clearly on Farmington’s side most teams and most players would have closed up shop and packed it in, but not Jaxon nor his teammates. He still played with a swagger and a belief that he could make things right. The confidence Coach Santiago has in his players is a reason this team believes they are never out of a game. Sure anyone could have taken that last shot, but the fact that it was Jaxon who took it after an off night speaks volumes about the trust his teammates have in him and in each other. Congratulations to Coach Santiago and our T-Bird Basketball team on last nights Semi-Final win. Good luck in Saturday’s 5A Final! GO T-BIRDS!!! 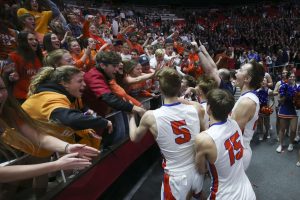 The team celebrating with their fellow T-Birds 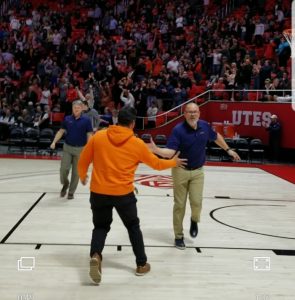